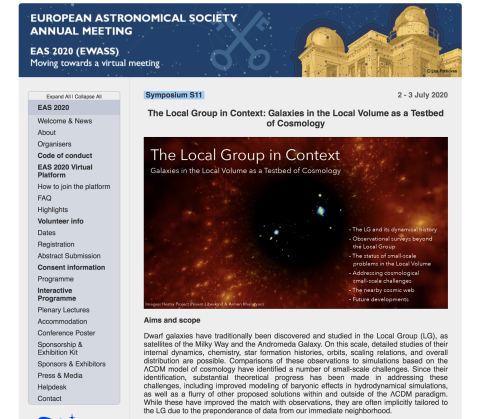 The annual meeting of the European Astronomical Society is happening this week. This year, I am not only a participant and speaker (two talks, one on Tuesday in S10, the other on Wednesday in S7). No, I am also chair of the SOC organizing one of the two-day symposia: S11 – The Local Group in Context: Galaxies in the Local Volume as a Testbed of Cosmology. It will take place on Thursday, July 2 and Friday, July 3, and consists of a total of six 1.5h sessions, a total of 30 talks and 10 ePosters.

When I had applied for this opportunity with the concept for this Symposium, last year and way before anyone had heard of the Corona virus, the conference was expected to take place in Leiden, The Netherlands. Things came differently, the conference switched to a massive virtual meeting (approaching 1500 participants in total), and also my symposium had to switch to a different format. Despite such challenges, I think we have a highly interesting symposium coming up, and I’m excited about the many excellent speakers who will contribute to our meeting.

Below, you find some more information on our symposium:

Dwarf galaxies have traditionally been discovered and studied in the Local Group (LG), as satellites of the Milky Way and the Andromeda Galaxy. On this scale, detailed studies of their internal dynamics, chemistry, star formation histories, orbits, scaling relations, and overall distribution are possible. Comparisons of these observations to simulations based on the ΛCDM model of cosmology have identified a number of small-scale challenges. Since their identification, substantial theoretical progress has been made in addressing these challenges, including improved modeling of baryonic effects in hydrodynamical simulations, as well as a flurry of other proposed solutions within and outside of the ΛCDM paradigm. While these have improved the match with observations, they are often implicitly tailored to the LG due to the preponderance of data from our immediate neighborhood.

Multiple surveys (e.g. Saga, PISCeS, Dragonfly, DGSAT) are now actively studying galaxy systems beyond the LG. These ongoing efforts, as well as upcoming advances in observational capabilities (e.g. ELTs, LSST, JWST, Euclid), let us extend comparisons with model expectations to galaxies and galaxy groups in the larger-scale Local Volume (LV). This provides an opportunity to determine by how much the LG is dominated by peculiarities, and to investigate which small-scale challenges are also present on this larger scale, thereby expanding the scope of near-field cosmology. Proposed solutions and alternatives to ΛCDM (e.g. warm and self-interacting dark matter, or more exotic ideas) can now also be tested by comparing them to the observed galaxies and satellite systems in the LV. Finally, this allows to see the LG in context of the overall structure of the nearby cosmic web and the flow of galaxies.

This symposium will bring together observers and theorists working on the LG with those studying the larger-scale LV. Topics to be discussed include: