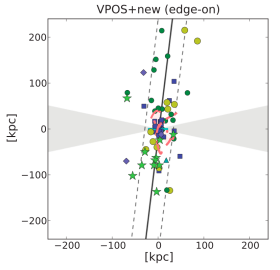 I study the phase-space distribution of satellite galaxies, globular clusters and streams of disrupted objects around the Milky Way. My work has revealed evidence for the existence of a Vast Polar Structure (VPOS), a highly flattened arrangement of satellites perpendicular to the plane of the Milky Way. Proper motion measurements indicate that the VPOS is rotationally stabilized, because most of the brightest satellites co-orbit within the VPOS.

Motivated by the existence of a satellite plane around the Milky Way, similar structures have been discovered around more distant host galaxies. The most prominent and significant example is the Great Plane of Andromeda. I am interested in the properties, stability and dynamics of satellite planes, and have discovered that the known non-satellite dwarf galaxies in the Local Group are arranged in similarly extreme and highly symmetric planar structures. 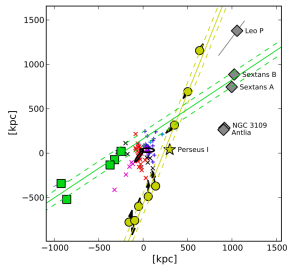 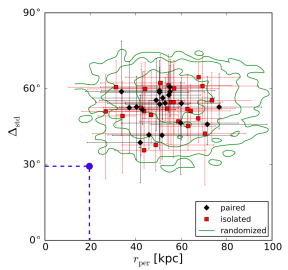 My work on comparing the observed satellite distributions with cosmological simulations has demonstrated that the highly flattened, kinematically coherent arrangement of the observed Milky Way and M31 satellites is unexpected in a hierarchical galaxy formation model as predicted by ΛCDM cosmology. This has contributed to establish the ‘Satellite Planes Problem’ as  one of the most-pressing ‘small-scale problem’ of cosmology, in particular because baryonic physics are not expected to have a strong effect on the distribution of satellite sub-halos on scales of 100s of kpc.

Using several numerical codes (RAMSES, PoR, SUPERBOX), I model the interaction of galaxies and the formation of second-generation ‘tidal dwarf galaxies’ (TDGs) in the resulting tidal debris. Because they are expected to be the only dark-matter-free galaxies in the Universe, TDGs offer a chance to discriminate between different types of dark matter and even modified gravity models. They have also been suggested as one possible solution for the Satellite Planes Problem, but several serious issues remain to be answered, in particular whether TDGs could explain the number, star formation histories and apparent dark matter content of the observed satellite. 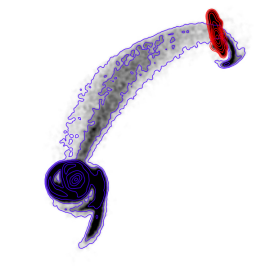