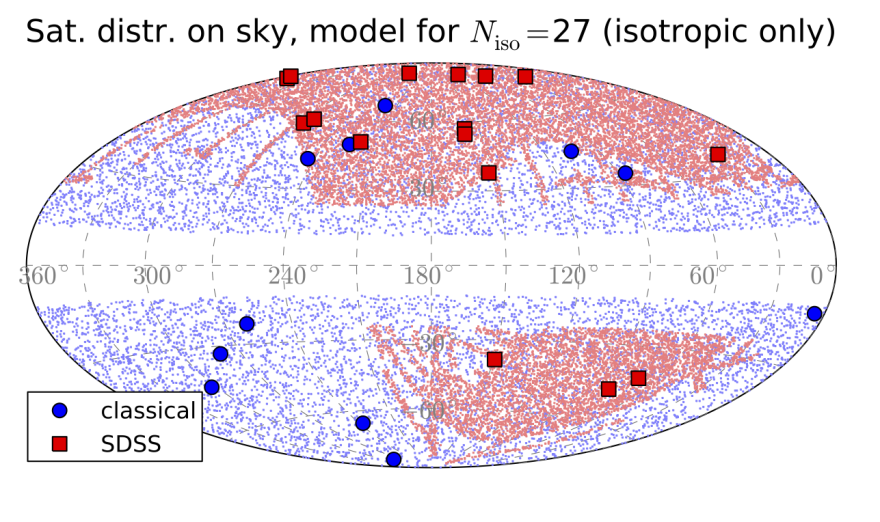 One frequent concern in regard to the Vast Polar Structure (VPOS) of satellite galaxies around the Milky Way – the plane-like distribution of satellite galaxies which mostly co-orbit – is that the fainter satellite galaxies do not provide much information. It is often argued that due to the preference surveys such as the Sloan Digital Sky Survey (SDSS) give to the regions close to the Milky Way poles, any satellite galaxy discovered by them has to align with the VPOS. However, this argument, often made in reaction to my talks on the matter, has never been quantitatively tested, yet alone shown to be correct. This is why I decided to check it myself, which resulted in my most-recent (and first single-author, yay!) paper: “The alignment of SDSS satellites with the VPOS: effects of the survey footprint shape” (accepted for publication in MNRAS, preprint: arXiv:1511.05557*).

My results: That the satellites discovered in SDSS align as well as observed with the plane defined by the 11 classical satellites is indeed very unlikely if the satellites were drawn from an isotropic distribution. This analysis considers the exact SDSS survey footprint (my algorithm essentially follows all the SDSS observing runs when building the mock satellite distributions). Overall, the significance of the VPOS is high (higher than that of the satellite plane discovered around the Andromeda Galaxy!), and the faint satellites discovered in SDSS do add to this (from about 4 to 5σ). Furthermore, I estimate which fraction of the Milky Way satellites considered in this study (for simplicity only the 11 classical and 16 SDSS satellites) might still be part of an isotropic distribution. This was motivated by the plane around Andromeda, which consists of only about 50% of the known satellite dwarf galaxies. I find that for the Milky Way, an isotropic contribution of more than 50% off-plane satellites can be excluded at high significance, and the expected number is between 2 and 6 out of 27.

The other benefit of this paper is that I now have an algorithm to model the SDSS (and other) survey footprints, such that I can apply them to cosmological simulations next. This will allow me to perform more detailed near-field cosmology tests of what is now called the Satellite Plane Problem of ΛCDM.

*: As a funny coincidence the arXiv ID 05557 is easy to remember for me: it is the 7th first-author paper I have written at CWRU, where my office has number 555. 😉