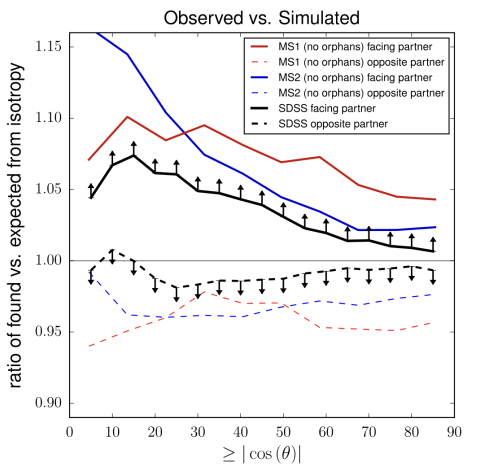 Specifically, I repeated the observational study on several cosmological simulations: the dark-matter-only Millennium-I (red in the figure), Millennium-II (blue in the figure), and ELVIS simulations, as well as the hydrodynamical Illustris simulation. I find that a similar, and in fact somewhat stronger, signal of lopsidedness of satellite galaxies is expected in ΛCDM, such that the effect does not seem to pose a threat to the standard model of cosmology. This is maybe a bit surprising, given the strong tension the distribution of satellite galaxies in planes of satellites poses for the model. Unfortunately, the statistics of the Illustris simulation are insufficient to judge whether the effect persists, or is in- or decreased, if the cosmological simulations include baryonic physics. This, as well as a more detailed investigation of the origin of the lopsidedness and its possible connection to environmental effects, satellite galaxy accretion patterns, and filaments of the cosmic web connecting paired host galaxies will be a natural continuation of this research. It is, however, already interesting to see that not all phase-space structures we see in satellite galaxy systems are in conflict with ΛCDM expectations.

Here’s a twitter thread providing some more explanations of the new study: