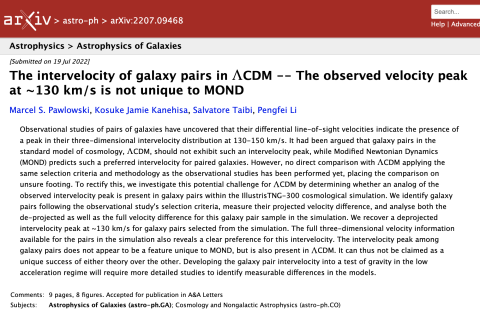 My newest paper has now been accepted for publication in Astronomy & Astrophysics and its preprint is now available on the arXiv. It is titled “The intervelocity of galaxy pairs in ΛCDM – The observed velocity peak at ~130 km/s is not unique to MOND“. In it, we investigate whether the mutual velocity of galaxy pairs shows a peak comparable to that found in observational studies. Such a peak had been explained by the dark matter alternative Modified Newtonian Dynamics (MOND), but whether it is present in cosmological simulations was unclear. I have summarized the background and main results of our paper on Twitter.

The paper is the result of a true team effort by my new research group at the AIP. We had worked on this in a “project-in-a-day” fashion, which turned out to be not only very productive, but also was an excellent team bonding and mentoring technique. In shortYou can read more about that in my Twitter thread.