New Scientist recently ran a cover story on the possibility of a past encounter between the Milky Way and Andromeda galaxies, satellite galaxy planes, and superfluid dark matter as a possible explanation of the MOND phenomenon. I was interviewed for the article a while ago and am quoted quite prominently in it, which is pretty cool.

When the article first appeared I was at a conference in a remote town in Austria, but luckily I could finally grab a copy to satisfy my curiosity when connecting in Heathrow on the way back. For you, that’s much simpler right now: until April 13, you can read this and all other New Scientist articles for free online if you register on their website. So go check it out: “Our Impossible Galaxy“.

Since this is basically common knowledge by now, it probably should be mentioned on my website somewhere. So here we go: I was offered, and have happily accepted, a Hubble Fellowship. This is possibly the best thing that could have happened to me this job season, since it is one of the most prestigious fellowships in astronomy, gives me a great deal of independence, and a very decent research and travel budget, too. And I have to admit, it is pretty cool to see my name in a NASA/Space Telescope Science Institute (STScI) press release announcing the 2016 Hubble Fellows. So, this fall I’ll be moving to the University of California, Irvine. More information on that once I myself have figured out the details.

One frequent concern in regard to the Vast Polar Structure (VPOS) of satellite galaxies around the Milky Way – the plane-like distribution of satellite galaxies which mostly co-orbit – is that the fainter satellite galaxies do not provide much information. It is often argued that due to the preference surveys such as the Sloan Digital Sky Survey (SDSS) give to the regions close to the Milky Way poles, any satellite galaxy discovered by them has to align with the VPOS. However, this argument, often made in reaction to my talks on the matter, has never been quantitatively tested, yet alone shown to be correct. This is why I decided to check it myself, which resulted in my most-recent (and first single-author, yay!) paper: “The alignment of SDSS satellites with the VPOS: effects of the survey footprint shape” (accepted for publication in MNRAS, preprint: arXiv:1511.05557*).

My results: That the satellites discovered in SDSS align as well as observed with the plane defined by the 11 classical satellites is indeed very unlikely if the satellites were drawn from an isotropic distribution. This analysis considers the exact SDSS survey footprint (my algorithm essentially follows all the SDSS observing runs when building the mock satellite distributions). Overall, the significance of the VPOS is high (higher than that of the satellite plane discovered around the Andromeda Galaxy!), and the faint satellites discovered in SDSS do add to this (from about 4 to 5σ). Furthermore, I estimate which fraction of the Milky Way satellites considered in this study (for simplicity only the 11 classical and 16 SDSS satellites) might still be part of an isotropic distribution. This was motivated by the plane around Andromeda, which consists of only about 50% of the known satellite dwarf galaxies. I find that for the Milky Way, an isotropic contribution of more than 50% off-plane satellites can be excluded at high significance, and the expected number is between 2 and 6 out of 27.

The other benefit of this paper is that I now have an algorithm to model the SDSS (and other) survey footprints, such that I can apply them to cosmological simulations next. This will allow me to perform more detailed near-field cosmology tests of what is now called the Satellite Plane Problem of ΛCDM.

*: As a funny coincidence the arXiv ID 05557 is easy to remember for me: it is the 7th first-author paper I have written at CWRU, where my office has number 555. 😉

Over the last few month, about a dozen new satellite galaxy candidates around the Milky Way have been discovered. Each new satellite acts as an important test of the Vast Polar Structure (VPOS), the plane of satellites rotating around our Galaxy. Today we put a preprint on the arXiv in which we show that the new objects align well with the VPOS, confirming my earlier work.

We also find that, even though the footprint of the Dark Energy Survey – the observational campaign which uncovered the majority of the new satellites – lies close to the VPOS, the alignment of the DES satellites with the VPOS is stronger than expected due to the footprint shape. We also predict the proper motions of the new satellites, assuming that they, like observed for the classical ones, preferentially orbit within the VPOS.

In addition we provide predictions for the velocity dispersions of the new objects under the assumption that they are either (1) dark-matter-free star clusters obeying Newtonian Dynamics, (2) dark-matter dominated dwarf galaxies following empirical scaling relations, or (3) that their dynamics follows MOND. These predictions are the main reason why we decided to publish the preprint before acceptance by a journal: we want to avoid that the measurements of the velocity dispersions become available before our predictions (which would make them look like post-dictions).

The current edition of our university magazine “think” features an article about my and Stacy McGaugh’s work on dwarf galaxies titled “Challenging Conventional Wisdom“. Click the link to read it online. 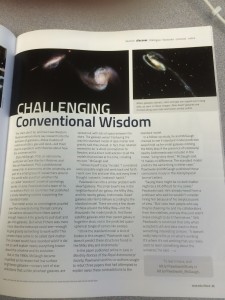 So, here is my paper number four of this year (it’s been a long, cold winter, what else than research was I supposed to do with my time?). In this one, I check whether a number of recently discovered objects in the halo of the Milky Way are aligned with the Vast Polar Structure (VPOS). This is interesting because those objects which move in a common sense in the VPOS probably share a common origin, so we might learn something from knowing which objects are well associated with the VPOS. I find that the most-distant known globular cluster of the Milky Way (which others say might also be a satellite galaxy) is aligned with the structure, just like the other ‘young’ globular clusters. In addition I find that one recently discovered stellar streams aligns very well with the VPOS. In fact, that stream appears to have the same orientation and distance as the well known Palomar 5 stream, and even the estimated metallicity appears to be consistent. Might it be directly connected to the Pal 5 stream? Maybe, but it will require numerical models to check if that stream could in principle be 140 degree long.
“The Vast Polar Structure of the Milky Way Attains New Members“, Marcel S. Pawlowski & Pavel Kroupa, 2014, ApJ, 790, 74 (or on the arXiv: 1407.2612)